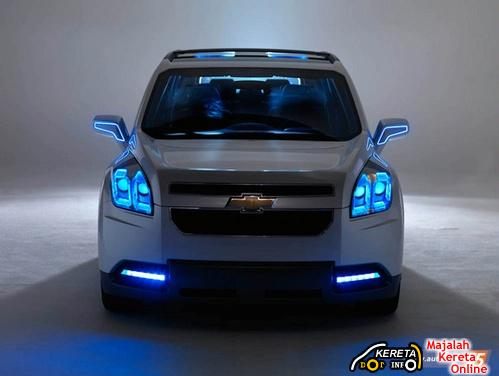 General Motors were good enough to launch a couple of images of the Chevrolet Orlando Concept a couple of weeks a go leading up to its unveiling at the Paris Motor Show next month. Evident European styling gave a positive reaction to the model, it isn’t anything special or ground breaking, but it certainly shows an appealing appearance for its potential consumers.

No concept is complete without a few eye catching features to set it apart from the production models, we struggled to see any of this eye candy in the original pictures, but these latest images which have been unearthed by auto55 shows some pretty nifty neon and LED lighting which actually does the job of putting the model into the cool books.

The Orlando concept previews the new MPV/SUV model the American automaker currently has in development, a prototype of which we spotted as recently as early this week. It has a wheelbase of 2760 mm and a three row seating arrangement allowing space for up to seven passengers. It is powered by Chevrolet’s latest-generation 2.0-liter turbo diesel developing 150 hp and 320 Nm of torque