BMW 640i CONVERTIBLE LAUNCHED IN MALAYSIA 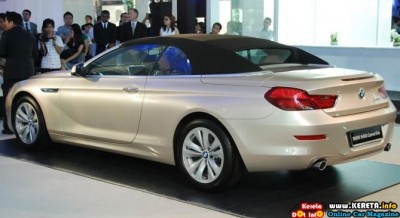 BMW Malaysia has launched the BMW 640i Convertible in Malaysian market.Priced at RM868,800 (on the road, without insurance, with BMW Service Inclusive + Repair) , the new 640i Convertible has a 3.0-litre 6-cylinder engine that produces 235 kW/320 bhp. The in-line six comes with BMW TwinPower Turbo technology, direct petrol injection and Valvetronic, and is mated to an 8-speed sports automatic transmission. All this gives it a claimed 0 – 100 km/h time of 5.7 seconds.Read the full news by KON from Autoworld below.

The original E24 6 Series debuted in 1976 as a replacement model for the New Six coupes. It enjoyed a lengthy production that lasted until 1989 when BMW discontinued it without a replacement. It wasn’t until 2003 that BMW revived the 6 Series nameplate with the controversial E63/64, a model that split opinion with its styling but went on to be a commercial success nevertheless – 50,000 units sold in its model run.

Global debut of the 6 Series Convertible took place in late 2010, but the production-ready version of the Coupe did not appear until middle of March 2011. In fact, BMW will only be showing the 6 Series Coupe live for the first time at the Shanghai Auto Show later this month. A year ago, BMW even teased the possibility of a CLS-rivalling 4-door version with its GranCoupe concept shown in Beijing.

As of now, BMW is only offering the 6 Series with petrol power, though you can bet diesel would surely be in the long-term agenda for the European market. Current available choices are a 3.0-litre straight-six or 4.4-litre V8, both turbocharged. BMW Group Malaysia has picked the smaller motor powering the 640i as our market’s sole offering. (Note that the ‘Ci’ model designation for coupe/convertible models has been discontinued.)

The 640i also comes with the full gamut of EfficientDynamics jingbang that allow it to simultaneously deliver a century sprint time of 5.7 seconds and fuel consumption rating of 7.9 l/100km in the combined cycle. Key features that help it to achieve those figures include Auto Start/Stop and the electrically-powered Integral Active Steering.

Underpinning the 6 Series is the same platform used to support the current-generation 5 and 7. The front suspension follows the double wishbone architecture, whilst the rear utilizes BMW’s Integral V multi-link rear axle. Malaysian-spec units of the 640i are specified with 245/45 R18 tyres, a rather conservative combo which BMW Group Malaysia chose to give the car a more relaxing character. The Coupe version may get bigger rims and lower profile tyres when it comes.

Unlike the tin-top 3 Series Convertible, BMW went back to a soft top for the 6. The immediate benefit of this approach is in the packaging aspect, as BMW is able to extract some 350 litres of boot space (two large golf bags, by BMW’s estimation) with the roof down. Rear passengers also benefit from the extra space with useful leg room available.

Right in the middle of the dash sits a fixed, free-standing 10.2″ LCD monitor that serves as the Control Display for the iDrive system, which also comes with BMW’s in-house sat-nav software Navigation System Professional. Also accessed from that monitor is the BMW ConnectedDrive system that includes complete USB connectivity and Bluetooth handsfree function. The BMW ConnectedDrive caters for mobile phones and portable music players, on-board mobile office applications and on-board Internet.

The highlight of the BMW ConnectedDrive range however is the inclusion of the BMW Head-up Display and BMW Night Vision with pedestrian recognition, which supports full-colour images and is available on the new BMW 6 Series for the very first time.

BMW Group Malaysia’s asking price for the 640i is RM868,800 on-the-road. That figure excludes insurance, but includes the 3-year/60,000km BMW Service + Repair Inclusive package, which covers the normal wear and tear repairs or replacements as well as maintenance, service and repair of factory components of the vehicle.