Exclusive close up with the batmobile (car) and batpod (motorbike) for the Batman The Dark Knight 2008 movie for KDI readers. We have compile some cool stuff about this real vehicle about the specification, function and pictures below:

Fuel: The “jet engine” on the back of the car was fed by propane tanks.

Full list
Rear flaps for brake
Front autocannons
Rocket launcher
Landing hook to Sprung landing stabilization
Integrated fire-extinguishing system
Integrated safety connection to gasoline control
Jet engine on back of car for quick boosts/rampless jumps
Stealth mode, which turns off the car’s lights and reduces the engine sound enormously, resulting in making the car very hard to find in dark places
Caltrops are deployed from the rear of the vehicle. Batman uses this to immobolize a police vehicle following him.
Front of car is heavily armored, so the car can crash into and destroy objects, and also protects the driver (Batman) while in the prone driving position/”Attack” mode
Both front wheels can eject when the vehicle is damaged to form the Batpod, a bat-cycle like vehicle. 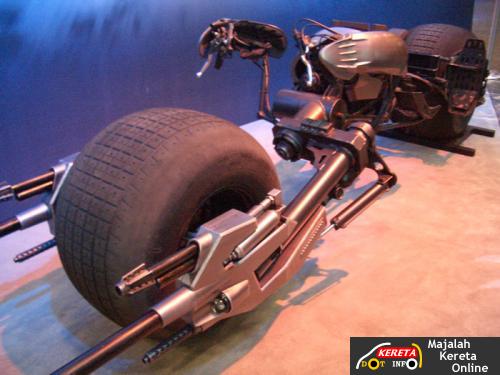 The Batcycle for the 2008 superhero film, The Dark Knight (directed by Christopher Nolan), is called the Batpod, and was designed by Nathan Crowley, who designed the Tumbler Batmobile for Batman Begins (2005). The bike has 20″ front and rear tires (basically the Tumbler’s front wheels), and the engines are located in the hubs of the wheels. 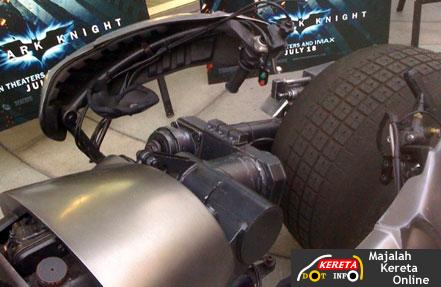 The Batpod is steered by the shoulders instead of hands, and the rider’s arms are protected by shields. The Batpod ejects out of the Tumbler’s front end, and because the Tumbler is ordered to self-destruct, the Batpod allows Batman to continue his pursuit. For the film, the bike is armed with grappling hooks, cannons, and machine guns.

Six models were constructed for the film’s production to anticipate some of them crashing. One action sequence in the film shows the wheels rolling against their normal rotation, seemingly for added stability in sharp turns or other maneuvers.