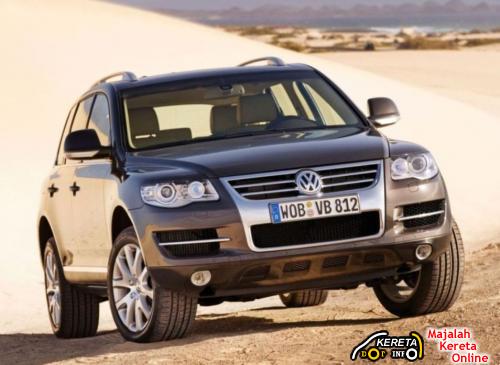 VOLKSWAGEN dealer VW Cars Sdn Bhd is offering a special price for 35 units of the Volkswagen Touareg in celebration of its sponsorship of the recently ended Monsoon Cup in Terengganu.

The luxury sport utility vehicle was made the official ride for the VIPs and skippers attending the sailing event, shuttling them between the various points of the event site.

The promotion will last until the end of the month, VW Cars executive chairman Datuk Ilyas Mohamad said in an interview in Petaling Jaya.

“Consumers are always on the lookout for the best deals in town, particularly at a time when the country is experiencing an economic downturn. We believe that offering such an unbeatable deal helps in building customer loyalty while maintaining VW’s prestigious brand values,” he said.
Ilyas suggested that a similar special offer for VW models was on the cards in future as VW Cars had sealed a new four-year deal to provide official vehicles for the Monsoon Cup until 2012.

He said the 35 Touaregs could be considered as brand new as they would have a post-Monsoon Cup mileage of less than 500km.

A few Touaregs had already found owners while the Monsoon Cup was still being held, Ilyas said.

The cup sponsorship has helped strengthen the VW brand in the country, he added.

“The sponsorship helps a lot in bolstering the brand as the event is viewed by some two billion people worldwide.

“Even in Kuala Terengganu, people thought that there were hundreds of Touaregs on the roads, instead of the 35 units, because they could be seen almost everywhere in town,” Ilyas said.