The A 45 AMG sees Mercedes AMG embarking on a new era. For the first time in the company’s history extending back over more than 45 years, Mercedes-Benz’s performance brand is offering a fascinating high-performance vehicle in the compact class. The A 45 AMG is representative of the “AMG Performance 50” strategy for the future, which is to run up to the 50th birthday of Mercedes-AMG GmbH in 2017.

With a maximum output of 360 hp and up to 450 Newton metres of torque, the AMG 2.0 litre four cylinder turbo engine is the most powerful series production four-cylinder engine in the world. The sensational power density of 181 hp outstrips even the most powerful super sports cars. At the same time, the engine also boasts supreme efficiency and complies with the EU6 emissions standard.The A 45 AMG also leads its segment in terms of fuel consumption, returning 40.9 mpg in NEDC combined mode.

These credentials indicate that a further high-performing member of the BlueDIRECT family is now taking to the road.The performance-oriented AMG 4MATIC all-wheel drive onboard the A 45 AMG sets new standards in the car’s segment. The substance of the new Mercedes-Benz vehicle architecture for front- and all-wheel drive provides the perfect basis for the A 45 AMG and at least two other high-performance premium automobiles from Affalterbach. In designing and developing the A 45 AMG, the experts at AMG have drawn on the company’s decades of experience in motorsport and the production of powerful, high-performance vehicles. 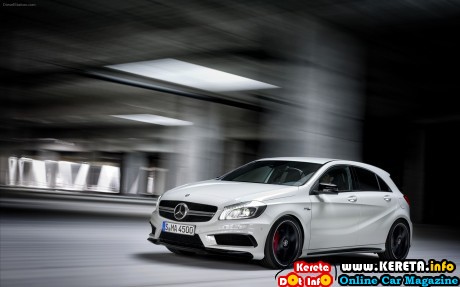 As such, the A 45 AMG will inherit the corporate DNA and embody the AMG brand claim “Driving Performance” to perfection, a fascinatingly sporty driving experience combined with impressive craftsmanship and pronounced individuality. Two figures show that the A 45 AMG holds pole position in its displacement segment, the newly developed AMG 2.0-litre turbo engine is the most powerful series production four-cylinder turbo engine in the world. A maximum output of 360 hp and up to 450 Nm of torque are unmatched by any other mass-produced turbocharged four-cylinder engine worldwide.

The power density of 181 hp is also absolutely unrivalled.In this discipline, the new AMG high-performance turbo engine even outstrips the most powerful super sports cars. The high power and torque output and the combination with the performance-oriented AMG 4MATIC all-wheel drive lead to extremely dynamic performance: the A 45 AMG accelerates from zero to 62 mph in 4.6 seconds, while its top speed stands at 155 mph (electronically limited).