After 33 years the Mercedes Benz G-Class once again has fresh momentum behind it, as the sales figures for this most enduring of luxury off-roaders go to show. Between 2009 and 2001 sales rose by more than 50 percent. A comprehensive facelift is now set to make this classic among cross-country vehicles an even more attractive proposition. With a new and luxurious interior, some discreet modifications to the exterior, new safety features, a new infotainment system and, in some cases, new engines, Mercedes-Benz has upgraded the award-winning G-Class even further in a continuation of its remarkable evolution.

The Mercedes-Benz G-Class was originally conceived as a vehicle for use primarily in tough, off-road terrain; and this was the way it was launched, back in 1979. Over the course of its long years of production, the specification has been regularly modified to reflect the requirements of its customers but the essential character of the G-Class remains unchanged. 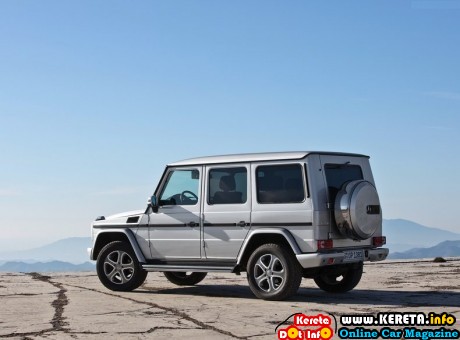 Over the years, state of the art electronics have been applied to improving its already outstanding off-road capability still further. At the same time Mercedes-Benz has continued to work on bringing the interior appointments and road-going qualities up to the same high standard as for the premium saloons emanating from Stuttgart. Its outstanding performance in tough terrain, its ability as a towing vehicle and its luxurious look and feel have all added up to ensure that the Mercedes-Benz G-Class is still going strong after what is now a third of a century. Even today, this classic model is still considered one of the best cross-country vehicles around and has only recently once again been voted “Off-roader of the year” after 33 years on the market. The entry-level model for the long-wheelbase Station Wagon is the G 350 BlueTEC with 6 cylinder diesel engine and a displacement of 2987 cc. This four-cylinder unit has an output of 155 kW (211 hp) at 3400 rpm and produces torque of 540 Newton metres over a speed range of 1600 to 2400 rpm. The BlueTEC technology developed by Mercedes-Benz is used to minimise the engine’s emissions, particularly of nitrogen oxide (NOx). The G 350 BlueTEC uses AdBlue, an aqueous urea solution, which is injected into the exhaust gas stream. This process releases ammonia, which converts up to 80 percent of the nitrogen oxides into harmless nitrogen and water by a process of reduction in the downstream SCR catalytic converter. Since the Mercedes-Benz G-Class is often used in remote areas of the world, as indeed it was designed to do, the engineers have made things even simpler by integrating the AdBlue filler cap into the vehicle’s filler neck compartment, accessible from the outside. One full tank of AdBlue is good for around 12,000 kilometres

The alternative to the diesel engine is the G 500, with its powerful 5.5-litre V8 petrol engine. This has an output of 285 kW (387 hp) and offers excellent torque of 530 Newton metres. The same engine also ensures that the G 500 Cabriolet has generous reserves of power to deal with any situation.