2012 Toyota Camry Standard and Hybrid will unveil at the U.S. market for this fall during the company’s annual national dealer meeting which took place on Wednesday in Las Vegas. The Japanese carmaker will support the new Toyota Camry with a massive media campaign in October with some 40 new commercials positioning the sedan as “smart, safe and worry-free.

Designed to meet the changing needs of the 21st Century driver, the new Toyota Camry will provide technologically advanced features, a contemporary design inside and out, improved performance and refined ride and handling 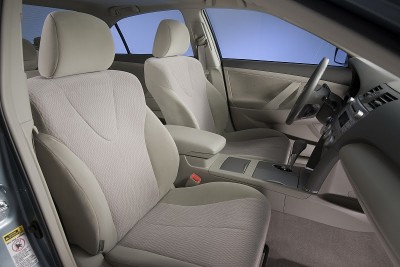 Toyota Motor Corporation (TMC) President Akio Toyoda told dealers that the company’s North American division will gain more autonomy and control over its operations. Up here, the Japanese carmaker Toyota has not revealed the specifications of Toyota Camry standard and hybrid version.

This time for the Japanese automaker to release the production version of Toyota Prius displayed a lightly modified version with new line of accessories under the PLUS moniker. The car will limited production and available for order in July.

Underneath the sheetmetal, the PLUS package adds a sports-tuned suspension with lowering springs (1.1 inches in the front and 1.3 inches in the rear) and a new rear sway bar constructed of high carbon spring steel.

Toyota Prius PLUS will be available four exterior colors -Blizzard Pearl, Classic Silver Metallic, Black and Winter Gray Metallic. On the outside, the Prius PLUS is dressed in a seven-piece ground effects kit that includes front and rear bumper spoilers, side skirts and a rear diffuser.