Bentley Motors and its customers in Beijing celebrated HM The Queen’s Birthday and her Diamond Jubilee year at the gala opening of one of the world’s largest Bentley dealerships a new landmark in the cosmopolitan Sanlitun district. To mark the occasion, Bentley unveiled the first example of its Bentley Mulsanne Diamond Jubilee Edition. Designed by the craftsmen and women of Bentley’s Mulliner division, the creators of the State Limousine presented to Queen Elizabeth II in 2002, just 60 examples of the Bentley Mulsanne Diamond Jubilee Edition have been created with each car representing a year of Her Majesty’s reign. These very special Bentleys are distinguished by a range of exquisite, handcrafted features paying tribute to the Jubilee. These include bespoke embroidery to all four headrests using gold stitching, veneered picnic tables in the rear cabin decorated with a gold overlay depicting a royal carriage used for great occasions of state as well as luxurious, hide cushions featuring the same motif. 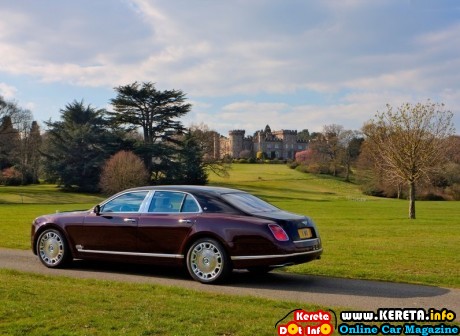 China is now the largest market for Bentley Motors. In 2011 the iconic British manufacturer delivered 1,664 cars to Chinese customers and during the first quarter of 2012 sales in the region grew by 84.66 percent compared with the same period in 2011. Bentley’s dealership presence is set to further expand in the next 12 months as the company introduces its latest high-performance coupe and convertible Continental models to Chinese customers in 2012. The Bentley Mulsanne captures the essence of the Bentley marque. It is elegant yet distinctly sporting in character, delivering effortless performance, while within its sumptuous cabin, advanced technology sits discreetly with handcrafted luxury. Designed and engineered at Crewe from the ground-up, the Mulsanne has reaffirmed the marque’s intent to create a luxury grand tourer with refined performance, unparalleled levels of interior luxury and coach building skills to the fore.