Yesterday we already posted about the 2011 Suzuki Swift which spotted in Hungary.And now Suzuki has released the first official photos and specifications for its new generation Suzuki Swift. 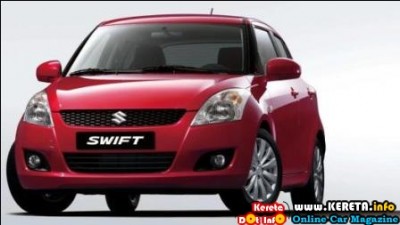 Extensive use of higher strength materials has made the body of the new Swift both lighter and stiffer than before, helping to improve impact safety for pedestrians as well as occupants.

An increased track with larger diameter wheels with lower profile tyres has resulted in better handling and dynamics, with the current model staking its reputation as providing a surprisingly nimble and entertaining package.

The new version has grown slightly in length by just over 90mm and adds 50mm to its wheelbase.

A new 1.2-litre petrol engine incorporating Dual VVT has been added to the range which develops 69kW at 6,000rpm and peak torque of 118Nm – slightly more than the outgoing 1.3-litre unit – mated to either a manual or optional automatic transmission.

Combined with a manual transmission this engine consumes just 4.16-litres per 100km on the combined cycle.A 1.3-litre diesel powerplant will also be available in time for the Swift’s launch in early 2011 which boasts an impressive combined fuel consumption figure of 3.5-litres per 100km.