Rolls-Royce hopes to resolve any issues that people might have with an all-electric or any non-traditionally powered Rolls, the 102EX is strictly a concept. Manufacturer wants to be sure that expectations of consumer are met, not too much extra effort has to be put into ownership.

Rolls-Royce engineers have installed two electric motors (145 kW each) and a lithium-battery pack in the 102EX. The pack uses five lithium-cobalt-manganese-oxide (or NCM) “pouch cells” sized at four, eight, ten, thirty-six, and thirty-eight cells in a formation that mimics the shape of the usual engine and transmission.

2011 Rolls-Royce 102EX Electric Concept’s exterior is finished in four coats of Atlantic Chrome, a shade of paint that uses ceramic nano particles to provide a unique reflective surface. Also, the nose-mounted Spirit of Ecstasy is now made of Makrolon (not stainless steel) and will glow. The fuel cap has been modified to provide a charging point with LED indicators that show current charge status such as blue (initial stage), flashing blue (charging), green (fully charged), flashing green (when the charging solenoid is removed). Red or flashing red indicates a problem in the system.

Lux interior design, it wears Corinova leather, which uses a “natural vegetable tanning process” and is 100% chrome-free and uses an aluminized foil weave instead of wood. Atlantic Chrome also finds its way to the interior, where the car’s gauges have been modified to provide the electric drive train’s information; examples include gauges for battery charge level, power reserve, etc. To make things even more convenient, there is a switch in the front center armrest that controls charging and houses a readout showing the car’s charge status. 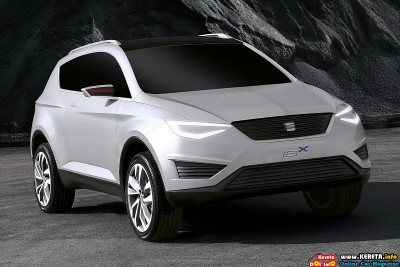 Seat IBX concept appears to be a follow up on Seat’s 2007 Frankfurt Motor Show Tribu concept, which never managed to reach production. The car is a concept study for a three-door small crossover that will be officially unwrapped at the Geneva Motor Show this week.

The IBX has been penned by Seat’s Chief Designer of former Lamborghini fame, Luc Donckerwolke. “The IBX was created from the gene pool of our next vehicle generation. This design DNA will have a profound impact on every one of our models,” said Donckerwolke. “And, with this urban sports utility vehicle, we are proving that with our design, our sporty pedigree and our youthful character, we can also create a vehicle concept that is unique among SUVs.”

As a electric vehicle, Seat IBX is fitted with a an electric motor that powers the front wheels and a battery package that offers a driving range of around 45 kilometers, or 28 miles. However, Seat stated that possible engine candidates for the production model include the firm’s direct injection TDI turbo diesel and TSI turboLinkcharged gasoline units, with a modern 4WD system being an option for “further enhanced mobility”.