Mercedes-Benz C350 is compact luxury sedan, which gets a pair of LED running lamps and an aggressively-styled lower fascia opening. A total of more than 2000 new components distinguish the latest generation of the Mercedes-Benz C-Class from its predecessor. The European market launch is taking place from March 2011.

In addition to the standard appointments  which now include a leather steering wheel  the two design and equipment lines ELEGANCE and AVANTGARDE are the basis for the individualisation range for the C-Class. The two lines are now more readily distinguishable from each other.

The front bumper has a more expressive and dynamic contour, the front section being brought closer to the brand’s new design idiom. As a central element at the front, the shape of the radiator grille is more prominently supported by the bumper. The central air intake opens out upwards in a V-shape, forming a visual base unit for the radiator grille. Pronounced side sections on the bumper extend from the sporty V-shape at the centre. These sections (beneath the headlamps) blend into the feature lines along the vehicle flanks, creating a link with the sides. The side air inlets in the bumper are positioned low down, giving the car a more road-hugging appearance. 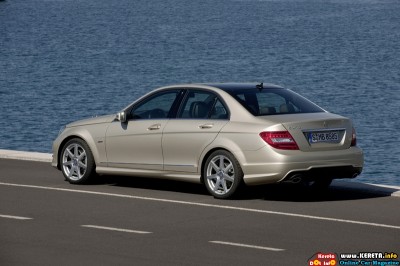 For 2011 model, the car gets a new aluminium bonnet, which contributes to weight reduction and therefore fuel efficiency. Other aluminium features include the front wings and the door modules. The contour of the bonnet in the area of the headlamps and radiator grille emphasises the V-shape of the front section more heavily than before. In conjunction with the newly designed headlamps, this renders the front section significantly more striking.

At the rear bumper, the light-catching contours and dividing lines have been modified to emphasise the width of the saloon and estate even more strongly. A continuous light-catching contour at the upper end of the rear bumper extends into the flanks to connect the tail end with the sides to emphasise the sporty character of the rear aspect. In the facelifted model, the tail lights are even more neatly integrated into the tail end by a continuous covering lens.

GM chose Thailand to hold the debut of the next-generation Chevrolet Colorado. The concept version will be unveiled at the 32nd Bangkok International Motor Show on March 25. GM says that it chose the location due to the popularity of pickup trucks and the growing importance of the Thai market to Chevrolet.

“Trucks play a key role in most Southeast Asian markets,” said Susan Docherty, vice president, GMIO Sales, Marketing and Aftersales. “Nowhere is this more evident than in Thailand, where trucks like the Colorado are ingrained in the local lifestyle. Thailand was a natural place to give the public a first glimpse of our all-new Colorado.”

“The show truck previews the next-generation Colorado midsize pickup truck, which will build on Chevrolet’s strong truck DNA and award-winning heritage,” GM said in a statement.