The 2011 BMW X5 wears a new fascia with headlights and fog lights that sit higher and closer to the grille. BMW has exaggerated the air inlets and increased the number of painted material, giving the maw a lower, more aggressive appearance. A matte-finished silver protection plate highlights the lowest portion of the bumper.

At the top of the hierarchy is the X5 xDrive50i, which features BMW’s all-aluminum, twin-turbo V-8. With direct injection, variable valve timing, and its “reverse flow” setup (the turbochargers rest in the valley between the cylinders), the engine makes 400-hp and 450 lb-ft of torque, the latter from 1750 rpm to 4500 rpm. 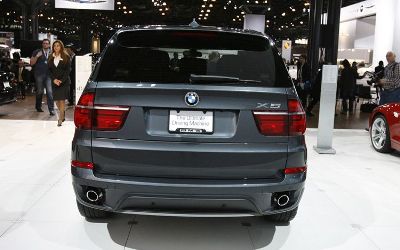 8-speed automatic that BMW introduced on the 5 Series Gran Turismo and 760Li Sedan last year and the transmission offers closer ratios in the lower gears for improved acceleration and two tall gears for cruising. The 2011 Infiniti QX the new 5.6-litre V8 engine combines the responsive acceleration of Infiniti’s VVEL (Variable Valve Event & Lift) technology with the efficiency of Direct Injection Gasoline (DIG) and 7-speed automatic transmission. With 400 horsepower and 413 lb-ft of torque, the Infiniti QX can handle tasks such as towing boats or trailers (8,500-pound towing capacity), while also offering over 10% better fuel economy than the previous generation Infiniti QX.