German tuning firm JE Design has released its first line of enhancements for the VW Touareg SUV model. Appearance of car equipped an aerodynamic kit for aesthetics and airflow. 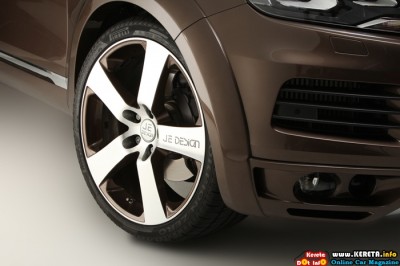 2010 JE Design Volkswagen Touareg SUV’s suspension is upgraded with an electronic lowering module that brings the vehicle 35mm closer to the ground. Customers can also order confirmation with the tuner if you want.

2011 Dodge Durango is all-new from the inside out. It is a vehicle that delivers premium driving performance combined with SUV capability and crossover versatility. Built at the Jefferson North Assembly Plant in Detroit, Mich., the new 2011 Dodge Durango arrives in showrooms in the fourth quarter of 2010.

The Dodge Durango’s luxurious interior materials and thoughtful touches will make owners and their crews thoroughly enjoy even the longest drive. It is also extremely comfortable for all three rows of passengers, and there’s a surprising amount of interior flexibility. With 22 different seating configurations, there’s plenty of room to store and move plenty of people and their gear.