The four 195-horse / 145 kW electric motors are mounted at the corners (one at each wheel) and provide torque vectoring, while the turbines – which can charge the batteries or add 188 horsepower in Track mode – are located centrally in a Texalium-lined compartment. Cooling for the turbines comes from the design of the car itself, which uses integrated channels to move air to the necessary areas.

It has interior sport-lux essentials: leather, neoprene, soft-touch materials, polished and vapor-blasted aluminum, and seats mounted directly to the bulkhead “as in a single-seater racing car”. 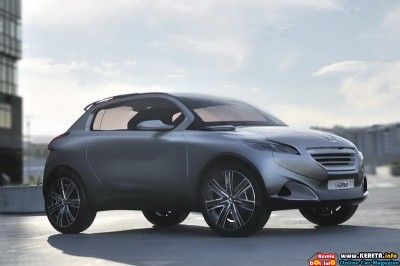 The Peugeot HR1 Concept shares the same expressive headlamps with their finely chiselled design and the single “floating” front grille which seems to be detached from the rest of the body, as the SR1. More further by the flowing wheel arches, large wheels and the raised sections above the rear windscreen, reminiscent of the “double bubble” roof design of the RCZ Coupe

The headlamps and “full LED” rear lights, finished in the style of hi-tech jewels which give the car a unique signature by day and by night. At the rear, the roof bars serve as an ingenious hinge for the opening one-piece, dark tinted glass tailgate.

The Peugeot HR1 Concept incorporates Peugeot’s innovative HYbrid4 technology. Under the bonnet, the internal combustion engine which drives the front wheels is a new three cylinder petrol unit. It has a capacity of 1.2 litres and, using Peugeot’s THP technology, produces 110 bhp. Also combining 37 bhp electric motor and, therefore, has a maximum potential power output of 147 bhp, with a combined fuel consumption of 81 mpg and CO2 emissions of just 80 g/km.

In addition, the electronically controlled 6-speed manual gearbox coupled with this power train is designed to offer maximum control. The driver can also opt between two modes of operation, sequential or automatic.