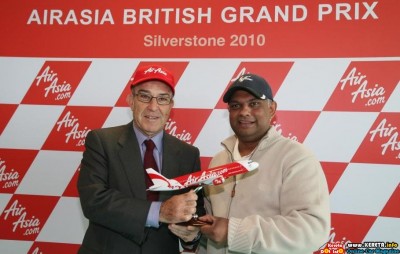 AirAsia are the Title Sponsors for the British Grand Prix!.Read the full news from Asiatraveltips below.

AirAsia and MotoGP rights holders Dorna Sports S.L. have signed an agreement for the airline to be the title sponsor of the 2010 AirAsia British Grand Prix at Silverstone.

AirAsia’s foray into MotoGP started when the airline sponsored AirAsia Malaysia 125cc riders Elly Idzlianizar Ilias and Mohd Zulfahmi Khairuddin as wild card entries in the Malaysian Motorcycle Grand Prix at Sepang International Circuit, Malaysia, in October 2009. The duo made the team proud by being the first two wildcard riders to make it into the top 20 for the 2009 season.

Zulfahmi went on to earn the ticket to race in the FIM World Championship and will be the first ever Malaysian to compete on the world stage in the 125cc class. The 18-year-old will race for Ongetta Team I.S.P.A. and will be sponsored by AirAsia.

AirAsia Group CEO Mr Fernandes said, “We had our first taste of MotoGP when we sponsored the entries of Elly and Zulfahmi. It was a magnificent experience. The boys did Malaysia proud, and we were thrilled to have helped make their dream a reality. We are proud and excited to be back in the MotoGP this year, with a bigger role by being the title sponsor of the British Grand Prix in Silverstone.”

Dorna Sports CEO Mr Ezpeleta added, “We are extremely happy that the best low-cost airline has chosen MotoGP to increase its impact on both the European and World stage, and specifically in the United Kingdom. It is fantastic to go back to Silverstone for this year’s race, and to do it with a new sponsor who has shown its dedication to the promotion of new talent makes it even more satisfying.”

AirAsia currently services an extensive network of 130 routes covering 70 destinations. In just 8 years, AirAsia has carried over 82 million passengers and grown its fleet from just two aircraft to 85.

The 2010 AirAsia British Grand Prix will take place at the Silverstone circuit from 18 -20 June.