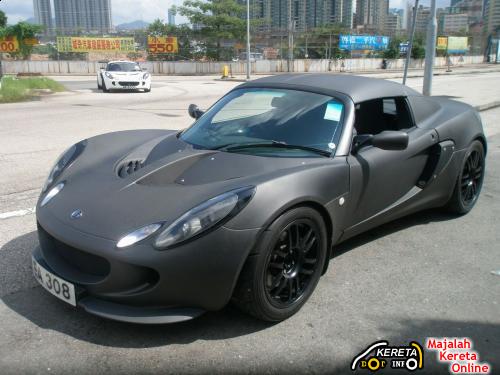 The demand of lighter and lighter car had become greater.Reducing as much weight as possible had become crucial to get that killer power to weight ratio. By theory, to reduce weight, we have to remove as much material as possible. But this will disrupt the integrity of the chassis and resulting a poor handling characteristic.

Any other option? Yes indeed. The two magical word of motor racing, ‘Carbon Fiber‘. Although physically appear like a plastic, the strength of the carbon fiber is undoubtly strong.

Most of car manufacturer only replace some of their body panel such as the bonnet and the fender. But in the 2002 Type 72 JPS Lotus Elise featured here, the whole body of the car is made from this light weight composite. Yes, the featherweight Lotus Elise just got lighter.Approximately 40 kg lighter than the original one.

Im farely confident the you would guess the car owner is a hardcore track junkie from the uk. But you were wrong. The all carbon fiber Elise is ordered by a Chinese customer in Hong Kong. The conversion was made by a Hong Kong based company,TW Auto.The conversion includes replacing both the interior and exterior with customized raw carbon fiber panels.Additionally, the diet also included a lighter KW suspension, Lotus Racing exhaust, JP Racing wheels, as well as bigger air intake and air filter.

The conversion took 6 month to be done however there is no information regarding the cost of it.