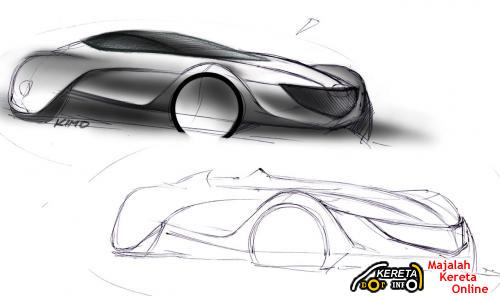 The Mazda Taiki is the fourth concept car in the Nagare design series, aimed to create a sustainable society. Taiki in Japan means the atmosphere that wraps the Earth in its protective mantle.The concept car was inspired by the image of a pair of Hagoromo, the flowing robes that enable a celestial maiden to fly in Japanese legend, floating down from the sky.

The Mazda Taiki will be powered by the next-generation RENESIS (rotary engine 16X), which is a front-engine rear-drive layout. Compared to the existing RENESIS engine which is a 1.3 liter, the new RENESIS 16X engine capacity will be enlarged to 1.6 liter (800 liter x 2), adopt direct injection system and the side housing will be made from aluminum.

Mazda Taiki reflects one possible direction for a future generation of Mazda sports cars aimed at helping create a sustainable society. The fourth concept car in the Nagare design series, Mazda Taiki, further evolves the “flow” theme to establish a breathtaking presence that clearly defines its Nagare credentials, and visually expresses the atmosphere – called taiki in Japanese – that wraps the Earth in its protective mantle.

The flow of air as a design concept

An evolution of Nagare design; the form of a car that operates in harmony with the environment; the creation of an iconic Mazda sports car symbolized by its next-generation RENESIS. To bring these concepts together and create a design worthy of the Nagare design series, chief designer Atsuhiko Yamada presented his team with a single objective: create “a design that visually expresses the flow of air”. “The preceding three concept cars in the Nagare series each took a hint from nature, such as the flow of water or the patterned surface of wind-swept sand dunes. In contrast, we wanted the concept car for the Tokyo Motor Show to convey both the beauty and power of nature, while also emphasizing the importance and the wonderful splendor of our environment. That led to our focusing on the air that blankets our planet and our desire to apply Nagare design in visually representing this entity, which is normally invisible to the eye.”, Chief Designer Atsuhiko Yamada’s words summarize, and as the very name of the concept car makes clear, Mazda Taiki’s futuristic design embodies Mazda’s determination to build cars that contribute to the realization of a sustainable society.

Aerodynamic performance with a drag coefficient of 0.25 and zero lift

The design team sought to achieve an extremely high level of aerodynamic performance through a combination of design and technologies. A bird’s-eye view of the Mazda Taiki body shows how much its width is tapered from front to rear. From the side, one sees the smooth line of the flat underside kick up dramatically at the rear of the body. Validating the designer’s wish to visually capture the motion of flowing air, wind tunnel testing proved the excellent aerodynamic performance inherent in the design. The distinctive shape around the rear wheels, which channels air flowing back from the front fender through a ‘tunnel’ formed between the body and rear fender, also proved effective in creating downforce. The already high aerodynamic potential of the original form was then fine tuned, the end result being an excellent drag coefficient of 0.25 and zero lift.

A collaborative effort with the tire designers and engineers created 22-inch tires for the Mazda Taiki that are dynamic in size and feature a bold tread pattern modeled after a flowing motif. The turbine wheel design was inspired by the turbo fan blades of a jet engine and developed in close collaboration with wheel engineers to create a unique design.
(Cooperation: The Yokohama Rubber Co., Ltd., Enkei Corporation)