OSK Research has estimated that the total industry volume (TIV) in 2009 would fall by13%.

“TIV were initially expected to grow by 11% to 539,472 units but the depressed sales towards year-end, as buyers defer their purchases, prompt us to anticipate a tough year in 2009,” it said.

Malaysian Automotive Association (MAA) president Datuk Aishah Ahmad said that this month’s car sales would be lower than November as buyers would normally wait until next year before making new purchases.

“We also expect next year’s sales to be lower than this year but we hope demand will pick up in the second half of 2009,” she told StarBiz yesterday, adding that 2008 sales were set to be the second-highest ever recorded in the domestic motor vehicle industry. 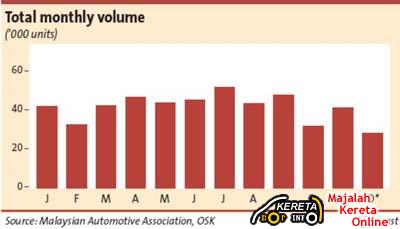 The MAA reported on Monday that domestic vehicle sales in November fell 6.7% to 40,865 units from a year ago.

“Already we are hearing from local car dealers projections of 10% to 20% year-on-year declines for 2009, which is in line with our preliminary sales projection, (so) we continue to remain cautious on the sector,” it said.

“However, we expect small manufacturers like Proton to benefit from the tightening consumption as consumers choose more affordable models.”