WE HATE IMPROPER & INCREASING NUMBER OF SPEED BUMP! YOU?

Speed Bump / hump or well known as road “bumper” is increasing in numbers and improper design. This will lead to many disadvantages to road users. Speed bump built to slow down vehicle that will pass the road. But, why can’t they make it properly and at a reasonable place only such as in front of school and market? 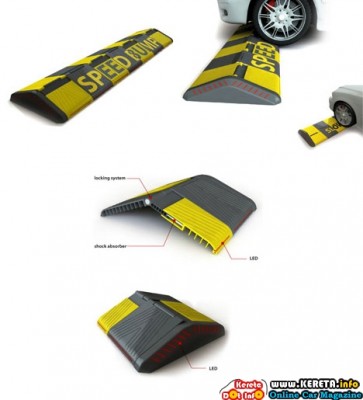 Too many improper bumps that has no yellow lines to warn the road user before passing it and most of speed bumps are not safe for motorist. Some have sudden high speed bumps that will damage vehicles. A speed bump (in British English a speed hump, road hump, speed breaker, sleeping policeman, or slow child; in New Zealand English a judder bar) is a speed-reducing feature of road design to slow traffic or reduce through traffic. A speed bump is a bump in a roadway with heights typically ranging between 3 and 4 inches (7.6 and 10 cm). The length of speed bumps are typically less than or near to 1 foot (30 cm); whereas speed humps are longer and are typically 10 to 14 feet (3.0 to 4.3 m) in length
The use of speed bumps is widespread around the world, and they are most commonly found where vehicle speeds are statutorially mandated to be low. Although speed bumps are very effective in keeping vehicle speed down, their use is sometimes controversial as they can cause noise and possibly vehicle damage if taken at too great a speed. Poorly designed speed bumps often found in private car parks (too tall, too sharp an angle for the expected speed) can be hard to negotiate in vehicles with low ground clearance, such as sports cars, even at very slow speeds. Speed bumps can also pose serious hazards to motorcyclists and bicyclists if not easily noticed, though in some cases a small cut in the bump allows those vehicles to pass through without impedance.

Disadvantages to speed bumps:
– Slow response time of emergency vehicles;
– May divert traffic to parallel residential streets;
– There is a possibility of increased noise and pollution for residents living immediately adjacent to the speed humps.
– The British town of Eastleigh state the following as disadvantages
– Can cause damage to some vehicles;
– Can increase traffic noise, especially when large goods vehicles pass by;
– Signs, street lighting and white lines are all required and may be visually intrusive;
– Can cause discomfort for drivers and passengers;
– Can cause problems for emergency services and buses.
– Drivers are distracted by the bumps, therefore ignoring other hazards such as children;
– Humps can impede or slow emergency vehicle access to areas.
– Increase pollution as traffic travels in a lower gear using significantly more fuel per mile;
– Are a substitute for active enforcement;
– Increase noise by both traversing over the bumps and by using more engine revs than normal;
– Cause spinal damage or aggravate chronic backache.
– In 2003, the chairman of the London Ambulance Service, Sigurd Reinton was reported as claiming that delay due to speed bumps was responsible for up to 500 avoidable deaths from cardiac arrest each year. He later denied the statement
– In Sweden, an evaluation of spinal stress in bus drivers against ISO 2631-5 required on health grounds

What about you? Your opinion?

Government need to look into this matter seriously and start implementing a rule to build a speed bump properly.
Please follow and like us: