Instead of super car, there is now a super bus which can carry 23 passenger in comfort cruising at 250km/h fastest bus speed ever, using environmental friendly electric motor developed by using F1 and aerospace technology.

The Superbus concept, which could cut the travel time between Abu Dhabi and Dubai to just 30 minutes, will be trialled by Abu Dhabi Department of Transport.

The test drive will take place after the first prototype version of the Superbus makes its Middle East debut in Dubai at the UITP Mobility and City Transport Expo, starting on April 11.

The electric-powered cross-over between a bus and a limousine is being presented to UAE Government authorities as the future of public transportation for business commuters and tourists.

The €7 million (Dh36.7m) project is being developed at Delft University of Technology in the Netherlands by a team led by the former astronaut Professor Wubbo Ockels.

The Superbus designer, Antonia Terzi, who previously worked in Formula One, said “the Superbus will tackle the challenges of mobility, spatial planning, service detail and environmental demands all in one”.

The development team has produced a video showing how the Superbus would travel from the capital to Dubai, setting off on standard roads before switching to a high-speed track and accelerating to 250kph. Nearing Dubai, it would then slow down and return to the existing road network to reach its destination.

The 15-metre bus has room for 23 passengers, who would enter and leave through eight gull-wing doors on each side.

In February The National revealed that the project was being discussed by Dubai’s Roads and Transport Authority.

The exhibition, which is being hosted by the authority, will run from Sunday until April 14 at the Dubai International Convention and Exhibition Centre.

The Superbus is 15 metres long and has eight doors on each side. It would run on a dedicated two-lane highway between Abu Dhabi and Dubai, and leave the “speed track” in urban areas to drop off passengers at agreed locations.

Powered by lithium iron phosphate batteries, the 530bhp carbon fibre vehicle is similar in length and width to a public bus, but with the height of a conventional SUV.

Although no feasibility studies have been done yet for the Abu Dhabi-Dubai route, the similar Amsterdam-Groningen route has been studied by the Dutch government, with other high speed connection routes currently under evaluation for several other countries around the world

Passengers who’ve bought seats can text or phone ahead to arrange a pick up time and location and the bus will show up! Or pick a destination and it will map out the most efficient way to get there. All this with tons of leg room, train-like seating plus a work space. This sounds like a 21st century ride that combines speed, comfort and fun!
For improved safety the vehicle includes a fast responding electronic guidance system and obstacle detection systems using radar to detect objects from a few hundred meters away. To improve maneuverability the rear wheels of the bus also steer. The bus boasts 750 onboard sensors to detect such things as whether all passengers have fastened their seat-belts and if there is anyone standing in range of the doors while they are opening and closing.

Interior
The interior of the vehicle is designed to provide comfortable, luxurious and private travel space for the passengers. It is split into two main parts: the passenger compartment and the cockpit. The passenger compartment is then divided into three cabins using two transparent dividing screens. The first cabin offers a single row of forward facing seats with each passenger provided with a personal table, headset and a multimedia screen. The two cabins behind have two rows of seats that face each other with a large foldable conference table in the middle, which also holds multimedia screens. 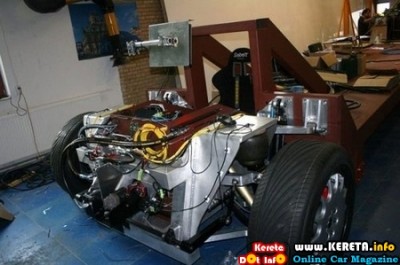