New Swift 2011 is a wider, better fuel efficiency car and Scrit car modifier decided to come out with new bodykit for new swift shown and picture taken during kdi visit at Osaka Automesse. With simple touch on the front grill, complete set of skirting, rear diffuser, fender grill marker and dark sport rims, it shows how nice a new swift can be. Read further info regarding new swift 2011. While the exterior changes are minimal, the interior gets some styling cues from the larger Kizashi saloon, particularly in its centre console. There is also new LCD display, new switchgear and metallic accents.

The Swift’s all-new platform increases the wheelbase by 50mm and the overall length by 90mm. Extensive use of higher strength steel has made the new bodyshell lighter and stiffer than before as well as offering refinement in underbody design. The front and rear tracks are 10mm and 5mm wider respectively. Suzuki claims the Swift, its best-selling model, is much improved dynamically as a result.

Official interior pictures have yet to be revealed, but Suzuki has indicated it will be more sophisticated and “dynamic” than the outgoing car. The interior design continues to feature black as its keynote colour with accents of silver throughout the car. The increase in wheelbase will also create more space for rear passengers.

In the UK, the Swift will be launched with a new Dual VVT 1.2-litre petrol engine that will be replacing the outgoing 1.3-litre unit. The Dual VVT unit produces 92bhp and 12.08kgm of torque, both figures slightly improved over the 1.3 unit. A manual gearbox will be standard and an automatic optional.

However, for the Indian market, the engine that will power this car is likely to be carried over – it’s an evolution of the K-series (K12) motor that powers the current Swift and Ritz. Variable Valve Timing technology that is being used in the European car could come to India as well. Just as it did with M16A on the SX4. Suzuki will also continue with the very successful 1.3-Multijet from Fiat, or the DDiS. 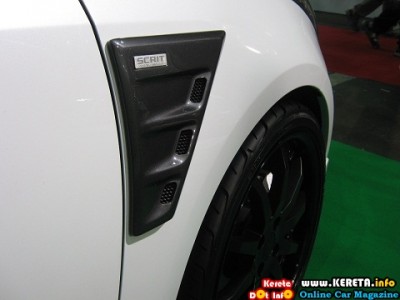 New interior photos of the next generation 2011 Suzuki Swift show a car with a smoother dash, a built in retractable screen, automatic climate control, Bluetooth, and a USB port.  The car, which will be sold as both a three-door and five-door, will have more ventilation than the previous model, as well as keyless ignition and a new selection of sport cloth for the interior.

To help increase fuel efficiency, the petrol engine with a manual transmission will likely get a start/stop system.  Without start/stop, fuel economy on the petrol ranges from 5.0- to 5.5-liters of fuel per 100 km (47 to 43 mpg), while the diesel gets a combined 4.2 liters of fuel per 100 km (56 mpg).  This leads to CO2 emissions ranging from 109 to 126 grams per km. Scrit also have some modified kits for the old swift. Above is one of the sample custom kit.