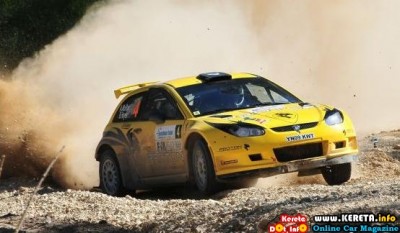 The Proton pair, Atkinson and McRae dominated last year’s Rally of Queensland, winning 15 from 18 stages, but a combination of big rocks and bad luck for the drivers kept them off the top step of the podium.
This year, they come again to Queensland to dominate the race again.Read the full news from Proton Holdings below.

AUSTRALIA, 14 MAY 2011 – McRae Drives PROTON Into The Lead In The Australian Rally, PROTON’s Alister McRae fought a hard day’s battle to claim a deserving early lead on the opening leg of the International Rally of Queensland.

Conceding more than 50 seconds which dropped him from second to 12th when his Proton Satria Neo S2000 stalled coming out of a water splash in special stage 3, McRae charged back to register three stage wins to eventually open up an 8.4-second lead over Nathan Quinn of Australia in a Mitsubishi Evolution on the last special stage of the day.

Leg one of the rally consisted of 10 special stages, two of which included a super special stage designed for spectators run on Friday night.

“It was such an incredible day, one that went from making a brilliant start to so nearly threatening to prematurely end our rally, and subsequently pushed us back to the head of the field,” said a delighted McRae who is gunning for his first victory in the Asia Pacific Rally Championship this season.

“The car was fantastic and judging from how it has performed thus far, we certainly have plenty of pace to contest for victory. I began the day with a choice of narrow tyres which did not seem to suit the terrain well but switching to wider tyres during the second part of the day gave us the traction we were looking for and it allowed us to put much more power down.”

For team mate Chris Atkinson, victory at his home rally in Australia has again eluded him with a repeat of last year’s misfortunes. After setting a blistering pace to lead the first two opening super special stages on Friday night and winning the first stage on Saturday morning, his run came to an abrupt end on the next stage due to an electrical failure. Atkinson however restarted the same evening under super rally rules at the repeat of the two stage super special, coming 2nd in the first stage, and 1st in the second stage.

“We had a good start to the rally, finishing 1st and 2nd at the rally shootout (super special stages) last night in front of more than a thousand spectators. Despite the setback, we ended the day still in the lead of the rally,” said Datuk Abdul Razak Dawood, the Head of PROTON Motorsports.

“The Satria Neo S2000 has clearly demonstrated that it has good pace and performance and barring any unforeseen circumstances on the final day, we should be well in contention for a podium finish or even victory.”

Another great boost in confidence for PROTON meanwhile, was in the performance of its 1600cc Satria Neos. The Proton Cusco Rally Team currently leads the two-wheel drive category with multiple APRC champion Karamjit Singh in the lead ahead of team mate Akira Bamba in third place.

The third and final day of the rally will be contested over seven special stages. The rally has attracted a record entry of 96 cars, including 16 overseas participants, representing 10 countries.