The new city car will debut for the 2010 model year. GM says it will incorporate the Beat Concept’s “core values.”

Chevrolet Beat: “Designed to evoke the mood of a speedy micro import tuner, the Beat is a front-wheel-drive, three-door hatchback concept built to be personalized, and powered by a 1.2-liter turbocharged gasoline engine mated to an automatic transmission. It’s loaded with technology, including a navigation system and premium stereo.” The Chevrolet Beat is one of three small car concepts introduced on April 2007 at the 2007 New York International Auto Show.At the 2007 Los Angeles Auto Show, General Motors announced the Beat will go into production for the world market, although not immediately in the United States. The production car based on the Beat will be assembled in South Korea.On July 3rd, 2008 it was reported that General Motors will shift its Chevrolet Beat concept car to the U.S. market. 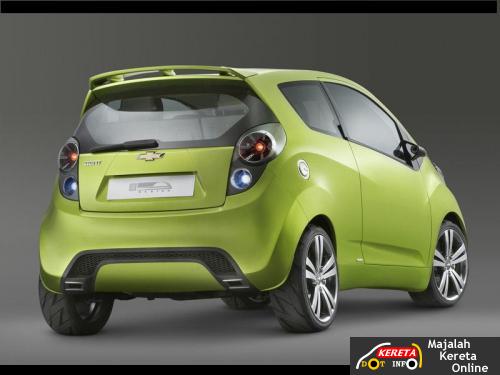 At the New York Auto Show, Chevrolet revealed three concepts, the Beat, Groove and Trax. GM set up a website and let consumers choose which one of the concepts should make it to production and the results are in. The Chevrolet Beat Concept has wiped the floor with the Groove and Trax concepts. “The people have spoken, the vote count tripled all previous GM online consumer surveys, telling us the Beat resonated with customers all around the world,”” said Ed Peper, Chevrolet general manager, “Chevrolet was overwhelmed by the positive reaction to each of the ‘triplets,’ but the Beat was the clear winner.

The production model will carry the spirit of the expressive Beat concept, offering compact, city-friendly dimensions and a small-displacement engine that delivers excellent fuel economy. It adds further depth and breadth to Chevrolet’s global lineup, which is sold in more than 90 countries, giving the brand a leadership position in the segment – the fastest-growing automotive segment in many regions around the world. The distinctly styled A-class car will be initially targeted to markets outside of U.S. and Canada, starting in mid-2009.

“Fuel solutions and great-looking cars are at the core of Chevrolet’s values, and this new production model aligns perfectly with those tenents,” said Peper. “It will be truly global, built around the world for a variety of diverse markets.”