State governments across Australia are poised to deploy automated cameras that mail tickets to vehicles considered by a machine to be noisy. The fully automated noise camera systems have been in development since 2005 but are now are active and issuing warning notices in the small New South Wales suburb of Mount Ousley, according to the Roads and Traffic Authority (RTA) Annual Report. The agency is looking for a regulatory means of making such ticketing solutions more common.Noise cameras have the potential to become as ubiquitous as speed cameras are in some parts of the world.

Several states and territories will have the devices posted at certain locations, ready to snap a shot of a noisy object. With the technology already in hand and ready to go, one has to wonder how long it will be before similar devices begin cropping up in Europe and the United States.

The fully-automated systems have been in testing and development for almost three years now, but this marks the first widespread official use of the noise cameras. Underlying the campaign against noise is an eye toward future development of residential and other ‘sensitive’ building projects alongside major thoroughfares. 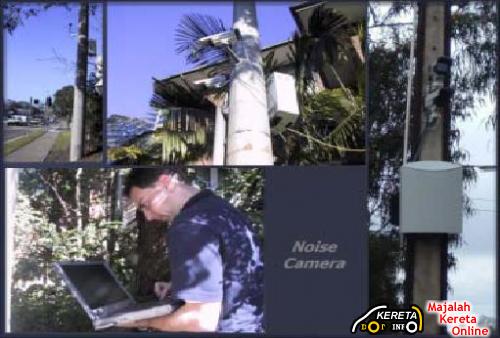 Designed by Acoustic Research Laboratories of New South Wales, Australia, the camera-based system uses a set of microphones to monitor and analyze sound activity on neighborhood streets. When a noise that crosses the set threshold is recorded, it stores 10 seconds of audio and video of the noisy scene and generates a ticket, reports The Newspaper. The machine can hold data for up to 10,000 tickets before needing to be emptied and reset.

New South Wales is beginning its roll-out of the noise camera program, while South Australia and Victoria already have similar programs targeting commercial vehicles using compression brakes, known more commonly in the U.S. as Jacob or Jake brakes, which generate a huge amount of noise but offload a great deal of stopping power from the mechanical brakes, which can overheat in some situations, causing the heavy vehicles to run out of control.

Officials say the programs in those states can easily be expanded to encompass other noise issues, including loud passenger vehicle exhausts, stereo systems or other noise pollution.

According to the manufacturing company’s specifications, however, there are some issues with the hardware that will prevent its roll-out across very cold and very hot regions of the world. The operating range of the equipment is certified only between 5 and 40 degrees Celsius (41 and 104 degrees Fahrenheit) – meaning the equipment would be essentially non-functional, or at least not reliably accurate for a significant portion of the winter and/or summer in many areas of the United States and Europe.