2011 Kia KV7 Concept unveil at the 2011 Detroit Auto Show. Kia MPV’s design study has a wider and lower stance thanks to the less vertical A-pillars and windshield. This is emphasized by the LED headlights, which cover almost the entire width of the fascia. The lines of the body are simple, while the 20-inch alloys add a sporty touch. The KV7?s stylistic highlight are the Gullwing-style rear doors, which help create a massive point-of-entry to when opened in conjunction with the pillar-less front passenger door. Kia says “promotes interaction in an open social environment with measuring 192 inches (4.87 meters) in length.” 2011 Kia KV7 Concept offers flexible seating configurations and multiple storage options. All seats can swivel, including the driver’s seat, and there’s even a mini-lounge in the rear with seating for three.

Interior features includes the dashboard is dominated by a large display, integrating all infotainment, climate and navigation functions, and moves more than six inches towards the driver when the engine start button is pushed. Passengers have their separate interface, in the form of a floating tabletop touch-screen computer display and the KV7 is Wi-Fi enabled.

Designers chose a cheerful color palette of soft beige and green tones and used a variety of unconventional materials, such as teak wood and wool, complemented by LED “accent illumination”. Hyundai Curb Concept as a compact Urban Activity Vehicle (UAV), it is aimed at young city dwellers. Penned by the designers at Hyundai’s California studio, the Curb’s styling is said to have evolved from the firm’s “Fluidic Sculpture” design language seen on the latest Sonata and Elantra.

The Hyundai Curb is the seventh vehicle (hence the HCD-12 codename) to be designed at the company’s California Design Center. The Curb is powered by a turbocharged 1.6-liter Gasoline Direct Injection (GDI) four-cylinder engine mated to Direct Shift Gearbox (DSG). This powertrain develops 175 horsepower and 169 lb. ft. of torque. By adding Idle Stop and Go (ISG) technology, the Hyundai Curb Concept would deliver 30+ miles per gallon in the city and 40+ miles per gallon on the highway.

Beneath the glass are structural trusses with the glass panels applied like a shield. The striking profile is dominated by a boomerang trajectory bodyside line. This dominant line brings the entire design together and reinforces the feeling of strength with its positive and negative shapes.

The roof also features pop-up roof rack towers, demonstrating the perfect blend of being rugged, yet high-tech. Curb has a lighted clam shell rear hatch, also opened via a touchpad for loading gear and a third rear access door for easy passenger ingress and egress. 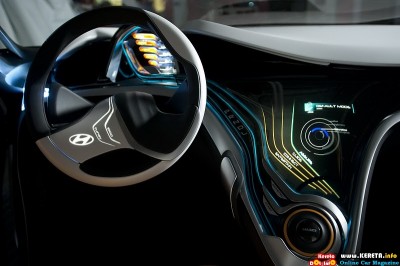 In interior, there a large acrylic screen with multiple zones allows information to be passed between passengers all via a touchscreen that appears endless. There are also monitors in the back of the headrests. A Heads Up Display (HUD) provided by Continental with navigation keeps the drivers eyes on the road, while passengers search for their favorite channel on Pandora. Drivers are able to navigate their music via a 3-D carousel of album cover art as well as view the related cover art for a currently playing track.

Inside the Curb, a driver could be listening to their favorite station on Pandora, cruising the city and get a phone call from a friend. Using Blue Link, the caller’s location shows up as a Point-of-Interest (POI).