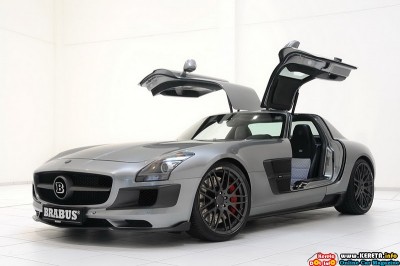 Brabus again, this time Mercedes-Benz SLS AMG is the car most tuners wanted to put their mark on at this year’s Geneva Motor Show and comes with a 700 horsepower wide-body version of an already impressive supercar.

The entire body was subjected to aerodynamic tunnel tests to ensure the car is stable at high speeds. The front spoiler, the covers for the air inlets, the gills, the rear spoiler and the diffuser are all made from carbon-fiber and contrast the silver paint of the 700 Biturbo. Brabus also added carbon side skirts fitted with air vents for the rear brakes.

Brabus’ iteration of the SLS AMG received the Widestar treatment, which means the car is 20 millimeters (0.8 in.) wider at the back, creating the necessary space for the extra wide 11Jx21 wheels (9.5Jx20 on the front).

The German supercar can be fitted with matte or shiny carbon-fiber elements of any color, matte anodized aluminium pedals and foot rests, as well as an ergonomically shaped sport steering wheel. The speedometer dial shows a maximum speed of 400 km/h (250 mph), even though 700 BiTurbo goes up to 340 km/h (213 mph). you can find it in interior’s car.

Added a new titanium exhaust system and a new suspension that lowers ride height by up to 30 millimeters (1.2 in.) and has a “Ride Control” function, altering the damping according to needs.

It marks a return to the passion for driving that has inspired great Toyota cars of the past, starting with the legendary 2000 GT in the 1960s. Finally, the new Toyota FT-86 II Concept makes its world debut at the 2011 Geneva motor show.

The car concept is giving the clearest indication yet as to the final design of Toyota’s next sports car. With its long, low bonnet, high wings and rear-set cabin, the Toyota FT-86 II Concept pays homage to Toyota’s sports car history and is an entirely driver-oriented concept.

The concept measures 4,235mm long, 1,795mm wide and 1,270mm high, with a long, 2,570mm wheelbase. The low, highly aerodynamic bodyshell is stretched tight over the engineering hard points, with the muscular bodywork rendered as compact as possible.

The FT-86 II returns to Toyota’s sporting roots by combining a free-revving boxer petrol engine with a compact and lightweight six-speed manual transmission and a low centre of gravity to achieve the best possible power to weight ratio. With a front-engine/rear-wheel drive configuration, this gives the car lively, accessible performance that is easy to harness and enjoy.

2011 Toyota FT-86 II Concept is the latest stage in the development of a new, compact rear-wheel drive sports car that is being jointly developed by Toyota and Fuji Heavy Industries (Subaru).

The new model will be launched in Europe in 2012.