Here is the pictures of modified bodykit for mitsubishi lancer GT Evolution X White colour presented at extreme autoshow bukit jalil. With the modified engine for lancer GT (the red one) picture which you can see a surbo / tornado inside the air intake host and the stabilizer bar etc with the mivec engine. And at the bottom of this post is the new bodykit for lancer evo x n-spec latest version by INGS.

In 2005, Mitsubishi introduced a concept version of the next-gen Evolution at the 39th Tokyo Motor Show named the Concept-X. Mitsubishi unveiled a second concept car, the Prototype-X, at the 2007 North American International Auto Show (NAIAS). 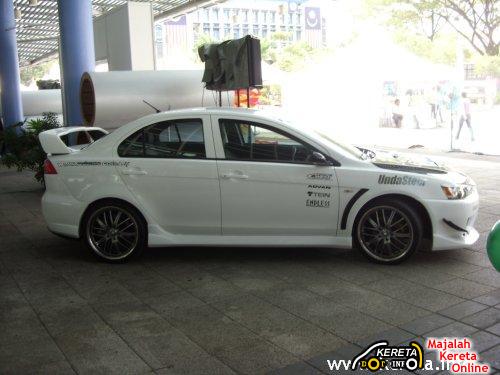 The Lancer Evolution X sedan features a newly designed 4B11T 2.0 L turbocharged, all-aluminum inline-4 engine. Power and torque depend on the market but all versions will have at least 280 PS (205.9 kW, 276.2 hp) (JDM version), the American market version will have slightly more. The UK models will be reworked by Mitsubishi UK, in accordance with previous MR Evolutions bearing the FQ badge. Options for the UK Evolutions are expected to be between 300 hp (220 kW) and 360 hp (270 kW).

Two versions of the car will be offered in the U.S. The Lancer Evolution MR, with 6-speed Twin Clutch Sportronic Shift Transmission (TC-SST). The other version is the GSR which will have a 5-speed manual transmission system. The car has also a new full-time all-wheel drive system named S-AWC (Super All Wheel Control), an advanced version of Mitsubishi’s AWC system used in previous generations.. The S-AWC uses torque vectoring technology to send different amount of torque to any wheel at any given time.

Japanese tuner Ings has released a front bumper and spoiler kit for the Mitsubishi Lancer Evo X. The N-Spec Lancer Evo 10 CZ4A looks at a glance like many of the other over-sculpted front ends available from various tuners, but the large intake, curious upper-intake ram air inlet, canards, brake ducts and intercooler shrouds of the Ings bumper appear to have been track-tested. The kit will also include a Z-Power wing when it goes on sale in a few months.

Ings plans to offer the front bumper in fiberglass or a “hybrid aero” urethane-fiberglass blend.

There’s not much information about the N-Spec Evo 10 at the Ings website, other than the specifications of the demonstration vehicle (which features brake and suspension modifications in addition to the body kit and Ings Sports 18-inch wheels, if you were curious), and pricing has not yet been released.