FORMULA ONE 2011 > VETTEL WINS THE EUROPEAN GP IN VALENCIA 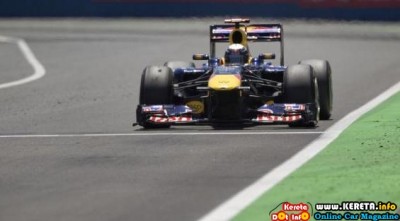 Sebastian Vettel wins the European Grand Prix in Valencia and further extend his championship lead.Fernando Alonso finished a very encouraging second for Ferrari in front of his home crowd and followed by Mark Webber.Read the full news by Matt Beer from autosport below.

Sebastian Vettel resumed his domination of the 2011 Formula 1 season after his Montreal blip, by winning the European Grand Prix in Valencia with ease.

The world champion broke his rivals’ challenge with an early charge that saw him establish a three-second lead within a few laps and then nurse a similar advantage for the rest of the afternoon, before a push for fastest lap in the final stint took his winning margin up to 10.8 seconds.

Fernando Alonso finished a very encouraging second for Ferrari in front of his home crowd. Both Ferraris had jumped Lewis Hamilton’s McLaren at the start, with the flying Felipe Massa dodging between Hamilton and Alonso, then trying to get down the inside of Mark Webber for second. But as he had to back out of the move, Alonso went around the outside of his team-mate and took third.

Alonso then stayed close behind Webber and managed to grab second place with an outbraking move on lap 21. The Spaniard could not shake the Australian off, and when the Red Bull made its second stop one lap sooner, Webber was able to vault back ahead of Alonso.

But the battle was not over, as at the final tyre changes Alonso regained the advantage by running three laps further on used softs while Webber was on his new medium tyres. The Ferrari rejoined just in front, and any hope Webber had of coming back at Alonso ended when the Red Bull team ordered him to back off and take care of a gearbox finish. He held on for third.

Running longer at most pitstops did not help Massa, who fell back to fifth in the end behind Hamilton, closing on the McLaren late on without ever threatening.

Montreal winner Jenson Button had a very low-key afternoon. He was passed by Nico Rosberg at the start and by the time he had dived back ahead of the Mercedes with a bold move at Turn 2 on lap six, the rest of the leaders were out of reach. A later KERS fault ensured Button would finish a lonely sixth.

Rosberg took seventh, having battled for a while with the impressive Jaime Alguersuari, as the Toro Rosso driver converted his miserable 18th on the grid to an eighth place finish by making a two-stop strategy work on a day when nearly everyone else had to pit three times. Alguersuari fended off Adrian Sutil to the finish, as the Force India escaped from an early battle with Nick Heidfeld’s 10th-placed Renault.

Sauber’s Sergio Perez pulled off a unique one-stop strategy but narrowly failed to convert it to points, chasing Heidfeld home in 11th.

Michael Schumacher’s hopes of points ended when he made contact with Vitaly Petrov’s Renault as he joined from the pit exit after his first tyre change. That meant an extra stop for a new front wing, leaving the Mercedes 17th. Petrov was only 15th, having never really recovered from a bad start.

Information and picture credit to autosport