Naza Italia brings latest Ferrari technologies to Malaysia to better care and manage local Ferrari owner’s needs. Ferrari owners in Malaysia can now enjoy the highest levels of care and servicing for their vehicles through Naza Italia Sdn Bhd’s official Ferrari support and service facilities. The service centre, at Naza Italia’s premises at the Naza Automall in Petaling Jaya, are fully staffed by a team of Ferrari authorised technicians and consultants.

Naza Italia was in March 2008 appointed as the official distributor for all things Ferrari in Malaysia and is also the first company to be appointed by Ferrari SpA  for the Malaysian market.

“Ferrari’s represent the very best automotive performance, combined with hand built vehicles that are in themselves works of art. Each car, hand built and numbered, also mark the owner as a maverick of sorts – someone who demands the best and is willing to aspire towards it. This service centre offers them the ability to look after their vehicles with a similar level of detail and care,” said Naza Italia Sdn Bhd chief executive officer S.M Faisal S. M. Nasimuddin.

The service centre is a precursor to a brand new 45,000 square foot sales and service centre that will be operational early next year. The centre, one of the largest and most advanced outside of Ferrari’s own facilities in Italy, will offer Ferrari owners additional customisation, service and support functions once operational.

The current service centre already has a staff of 7 Ferrari service specialists with a combined total of over 10 years of experience with the vehicles.

“We want people to drive their Ferrari’s and live the dream. The fundamentals to accomplish this include keeping the car in prime running condition. This centre is the first step towards ensuring that,” added S.M Faisal.

For more information, service bookings or queries on the service centre contact Naza Italia After Sales at 03-7956 8599. Operation hours are from 9am – 5.30pm for Monday – Friday and 9am – 1pm for Saturday. 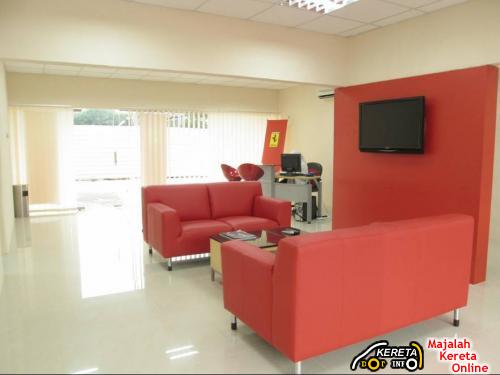 Naza Italia Sdn Bhd is a subsidiary Of Naza Group Of Companies. Naza Italia was granted exclusive rights by Ferrari SpA to import the iconic luxury automobile brand and represent all things Ferrari in March 2008. Today, Naza Italia continues to bring in a comprehensive product line from the world leading marque from the F430, the 599 GTB Fiorano as well as the flagship 612 Scaglietti and the newly launched California