Expensive car fans in Malaysia now starting to look and attracted to the rare Bentley GT exclusive cars which cost more than half million Ringgit. We can see more Bentley Continental GT around us instead of regular expensive BMW and Mercedes driven by Mr Moneymaker. Here we share some of the agressive looks of Bently Continental GT with wide bodykit and customized Bently bodykit. 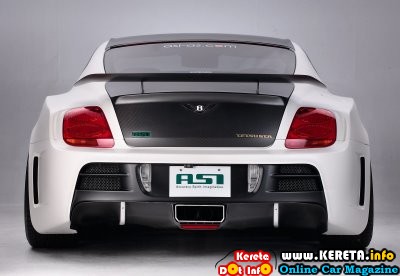 The new Continental GT is even faster than its predecessor. With its power output raised to an immense 575PS (567bhp/423kW) and 700Nm (516lb ft) of torque. In tandem with a new six-speed Quickshift transmission, gear change times are reduced by 50 per cent, it will launch from standstill to 60mph in just 4.6 seconds and reach a top speed of 197mph (318km/h).

The Bentley Continental’s stately appearance has also been reimagined from the ground up in order to better showcase ASI’s spectacular power boost. The 2070mm wide body, long-grill exterior features LED day lights, carbon fiber lip elements and a plethora of dry carbon components (hood, roof cover, trunk lid, rear wing, rear diffuser).
With increases in power, torque and fuel efficiency; the Continental GT’s engine is renowned as one of the most technologically advanced of its kind. Designed in a unique ‘W’ configuration, it is the most compact 12-cylinder engine in the world.

Capable of running on the latest environmentally sustainable bio-fuels thanks to its advanced FlexFuel technology, allowing it to run seamlessly on gasoline, bioethanol (E85) or any combination of the two.

With a 40:60 (front:rear) split power ratio, the new Continental GT feels even more poised for action and more controllable cornering.