ALL ABOUT PROTON INSPIRA – SPECIFICATION & PRICE

Proton has successfully launched its new model, Proton Inspira which is the result of technology sharing between Proton and Mitsubishi. With additional and improved features such as Proton Ride and Handling, nicely tuned suspension system for comfort, this new model is simply better than the other car model with the price range between RM78,999 – RM91,999.

ALL ABOUT PROTON INSPIRA – SPECIFICATION & PRICE

PRICE OF PROTON INSPIRA IN LANGKAWI

SUBANG JAYA: Even before its launch, Proton’s latest Inspira sedan was the subject of controversy with some quarters accusing the national car maker of back pedaling towards the early Proton days of rebadging Mitsubishi models as its own.

He said the Waja replacement model originally started out as a joint development project between the national car maker and Mitsubishi Motors Corp some three years ago.

The project was supposed to be on a joint platform development and sharing basis.

“Under the project, Mitsubishi and Proton will then use their very own upperbody designs on the new platform which will result in two very distinctive models.

“But because of the economic downturn, Proton decided to defer the project but Mitsubishi carried on with the platform and upperbody development which became the Mitsubishi Lancer,” he said.

Rather than to restart the project from scratch, Proton decided to use the Lancer as a new start point while adding value to an already good design.

Zulkifli said Mitsubishi was willing to allow Proton to rebadge the Lancer as the Inspira without changing any key features.

“We felt that our engineers who had trained under our subsidiary Lotus Engineering were able to improve the driving dynamics and handling of the Lancer,” he said.

After convincing Mitsubishi that Proton could improve on Lancer’s driving performance, Mitsubishi gave the green light to the suspension tweaking.

Among the improvements were revised suspension rating and bushings for a more comfortable ride and the incorporation of thicker anti-roll bars for better cornering stability.

Others improvement work include closer body gaps of 2.5mm compared with 3mm in the Lancer, and reduced levels of noise, vibration and harshness.

“Even when our products are good, people will still say they are not good enough because we are Proton. So, we have to be better,” Zulkifli said.

Proton had shipped five Inspira sedans produced by its factory for crash testing in Japan to ascertain its crash worthiness and safety features.

“At our Shah Alam factory production lines, Mitsubishi have stationed its engineers to ensure that the Inspira were produced in accordance to Mitsubishi’s quality standards,” he said.

Even Mitsubishi Motors Corp’s top management team, consisting of its head of research and development, DCGM of Asean and master vehicle evaluator who came to Shah Alam to test the Inspira, have praised Proton for work done on returning the suspension system for better comfort and handling.

“They told us that Inspira offered better ride handling characteristics and noise, vibration and harshness isolation compared with the Mitsubishi Lancer,” Zulkifli said.

Inspira, Proton’s latest model, is a mid-sized four door sedan introduced to enhance and strengthen the upper C-segment offering in the line-up of Proton’s models.

Syed Zainal said Mitsubishi Motor Corporation has committed to purchase the components produced in Malaysia for export to other countries, particularly in Thailand, for its Mitsubishi models.

“The export of Inspira components will start next year. We are now finalising discussions on this and also on how to export the model outside the country,” he said at the official launch of the Inspira here Wednesday.

Proton has slashed the price of Inspira models, claiming it is a result of manufacturing cost savings. The company also stressed that the vehicle is the result of an original equipment manufacturer collaboration with Mitsubishi Motor, not a rebadging.

The 1.8 manual transmission model was initially priced at RM79,888 at the soft launch last month but has dipped now to RM78,999.

Syed Zainal Abidin Syed Mohamed Tahir said Proton reduced the prices due to cost savings from the models being manufactured in the same plant as the Exora.

He added that Inspira is a testimony to affordability.

Syed Zainal also defended Proton’s collaboration with Mitsubishi Motor in producing the Inspira, saying it was an industry practice.

“Collaborations are the norm and demonstrates that Proton is fully flexible. The door is always open to other original equipment manufacturers,” he added.

Syed Zainal said Proton has target to increase the local components in the Inspira to 60 per cent within a year from 40 per cent.

On whether Proton will further reduce the selling price of Inspira if the vehicle achieved 60 per cent in local components, he said: “It is too early to say. I think overall, we want to localise the car within a year, to 60 per cent.”

Proton has to date received 1,800 bookings nationwide for Inspira since its soft launch on Oct 14 and is seeing about 100 bookings daily. 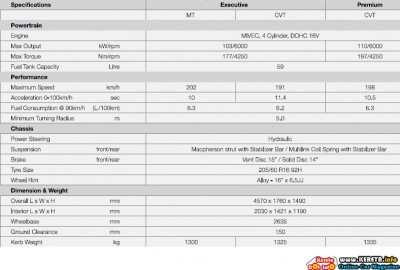 Proton launched the car with much fanfare this morning to a packed hall at its Centre of Excellence in Puchong near here.

Last month, Proton had a soft launch for the Inspira by revealing only the front portion of the car to the public.
Mustapa getting a feel of the Inspira as Mahathir speaks to Proton Holdings chairman Datuk Sri Mohd Nadzmi Mohd Salleh.
The Inspira, the result of an OEM collaboration between Proton and Mitsubishi Motors Corporation, has been enhanced further by Proton in terms of its performance and ride comfort.

According to Proton Holdings group managing director Datuk Syed Zainal Abidin Syed Mohamed Tahir, “we have further enhanced the car with several new features including the Lotus DNA of exceptional ride and handling and now, what we present to you here, is a product that is more affordable for Malaysians.”

Public response has been encouraging, he said.

“Since our soft launch on Oct 14, we have received 1,800 bookings nationwide as of yesterday,” he said of the new model that has 40% local content, which is expected to be raised to 60% in future.

The Inspira, whose name is derived from the Malay word “inspirasi” (inspiration in English), differs from the Lancer model with a revised front end featuring a grille with the Proton logo and a winged chrome bar.

The car will be available in maroon, silver, white and black.
The Inspira interior revealed at last. This is the 2.0-litre variant.
The vehicle is positioned as a high C-segment/low D-Segment vehicle.

The Inspira  is a model that has been jointly-developed by Proton with its Japanese partner under a new strategic alliance that is based on the global ideology and benefits of product sharing.

The automatic CVT or Intelligent & Innovative Vehicle Electronic Control System (INVECS-III), is an advanced system that automatically selects the optimal gear ratio based on road and driving conditions with a self-learning ability to match an individual’s driving style.

While sporting significant aesthetic enhancements, the Inspira is being further improved with the unmistakable Lotus ride and handling, enhancing the car’s driving experience and comfort.

Elsewhere, changes are not easily noticeable.

The suspension system has been tweaked for a “Lotus handling and ride” with changes to spring and shock absorber ratings, as well as bushing stiffness.

The high-end 2.0-litre variant gets additional features such as steering column-mounted paddle shifters, leather seats and a portable GPS unit.