British designer Peter Norris steps in with a new study that envisions a future sports car model for Fiat. However, this concept would not necessarily make a successor to the affordable Fiat Coupe, as the car carries a Pininfarina badge, thus hinting to a more luxurious model. 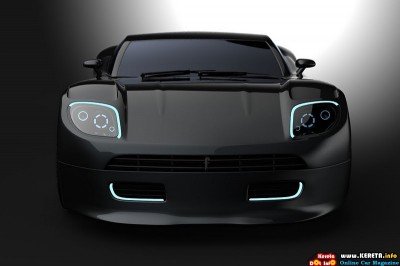 The designer explained that the project started as “a reboot of the Fiat Coupe”, representing a vision of a present day model. An ex-Fiat Coupe owner, Peter Norris changed his mind halfway through the project and switched to a luxury coupe, hence the Pininfarina badges on the car.

The rear-wheel-drive luxury sports car that aims to embody the essence of the Italian thoroughbred with front engine. Judging from the drivetrain layout, this concept would be more of a successor to the 1960?s RWD Fiat Dino rather than to the late 1990s FWD Fiat Coupe designed by Chris Bangle.

The car has an aggressive stance thanks to the massive wheelarches, while the front end brings to mind modern-day Aston Martins, especially the shape of the headlights and the upright bumper. The rear features C-shaped LED light units and central exhaust pipes that give the coupe an elegant look.  The coupe sports a sleek profile and a very low roofline, which make the wheels seem colossal. It may not be anywhere close to being a historic model for Cadillac, but for some, the outgoing DTS has a special place in their wish list. In fact so special that Nicola Bulgari of the renowned Italian jewelry, perfume and more recently hotel chain family, decided to add the last DTS to roll off the production line to his personal car collection.

The full-size sedan that is more widely known around the world for being the U.S. presidential car will join an impressive range of vintage American models in Bulgari’s collection housed at facilities in Rome, Italy and Allentown, Pa. The grandson of a Greek silversmith who opened a jewelry shop in Rome in 1884 owns several other Cadillac and LaSalle cars, the latter of which was a sister brand to Cadillac from 1927 to 1940, his first being a 1938 Cadillac V-16 Town Car that he bought when he was 25 years-old.

The Roman-born vice chairman of the Bulgari Group and honorary president of the Italian Government Tourist Board is also the owner of three recent Cadillac models including the 2009 XLR-V Coupe equipped with a special Bulgari speedometer, a 2010 CTS Wagon and 2009 CTS-V Sedan.