Peugeot released a race car diesel-hybrid at the 2011 Geneva Motor Show, called 908 HYbrid4. The race car designed to compete in the 2012 edition of the 24 hours of Le Mans. The first track test of the Peugeot 908 HYbrid is scheduled for the end of March, with Peugeot aiming to run the car at the official pre-Le Mans 24 Hours test day on April 24. 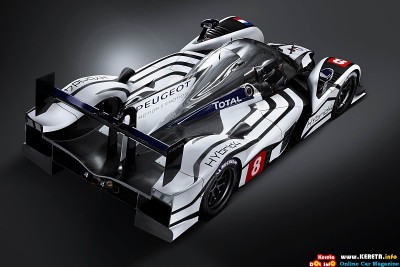 Starting from 2011, regulations for the Le Mans race make hybrid vehicles eligible for top honors, with the objective being to encourage makers in developing hybrid race cars that can challenge the supremacy of diesel-powered Audis.

According to comply with the latest endurance racing regulations, the 908 Hybrid4 will play a major role in Peugeot’s 2011 environmental strategy. The hybrid system uses the same 550 hp V8-diesel engine as the conventional 908, but adds an extra 80 hp boost thanks to an electric motor powered from the stored kinetic energy generated under braking.

Carlsson C25 Royale is supercar which based on the Mercedes-Benz SL 65 AMG, the heavily customized coupe with the fixed rooftop. The car showed up at the Geneva Salon. Compared to the Mercedes SL65 AMG coupe-cabriolet, the C25 Royale is 180 kilograms lighter, thanks to the extensive use of carbon fiber, which is found on the hood and the fixed roof.

This contributes to a lower center of gravity, in addition to the revision of the weight distribution, both aimed at offering improved handling. Other weight-saving measures include the fitting of a full ceramic brake system, which is 50 percent lighter than on the SL 65 AMG.

The car will be built in a limited run of 25 units, company officials said six vehicles have already been sold and will be delivered to the customers in 2011. According to Carlsson, each C25 Royale takes six months from order to delivery. The custom exterior styling is matched to a bespoke interior with Carlsson offering buyers a variety of choices in features and materials.