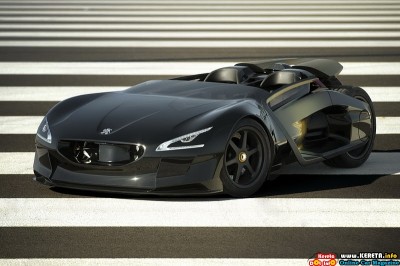 2010 Peugeot EX1 Concept will have its world premiere at the Mondial de l’automobile 2010 in Paris later this month. It came same with a celebration of the marque’s 200th anniversary. Peugeot’s thoughts are that of an “extreme dream car” which demonstrates the “exciting possibilities for electric power”.  Peugeot EX1 Concept also show debut in Paris Motor Show on September 30. 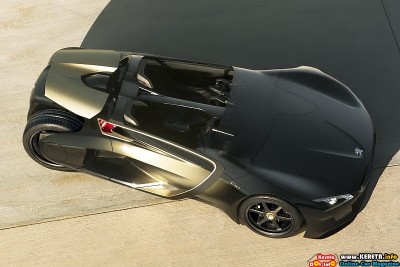 It have 0.90m in height and 1.77m in width, makes use of a monocoque body structure manufactured from a carbon/honeycomb composite to optimize weight and rigidity. The design of the water droplet-shaped body incorporates Peugeot’s new design language, including the “floating” front grille and flowing contours.

The Peugeot EX1’s motivation comes from a pair of electric motors, one on each axle, thus offering four-wheel drive. Each electric motor produces a peak output of 125kW, for a combined 250kW or 340HP and 240Nm (177 lbs-ft) of constant torque. Energy is provided by a high-output lithium-ion battery.

The car is powered by a quiet, locally emission-free electric drive with peak output of 70 kW (95 hp), developing a high torque of 290 Nm. The maximum speed is electronically set at 150 km / h.

The advantages of lithium-ion batteries include their compact dimensions and significantly higher efficiency in comparison with nickel-metal-hydride (NiMH) batteries. They offer 30 percent more energy density than NiMH technology, and 50 percent more power density. Also fully charged batteries, the Mercedes A-Class E-CELL has a range of over 200 kilometres (NEDC). External features of this battery-powered electric car include the standard polar silver painted body and an “E-CELL” sign in silver lettering on the boot.

Mercedes-Benz applies the same high safety standards in the A-Class E-CELL as in all its other series-produced vehicles.